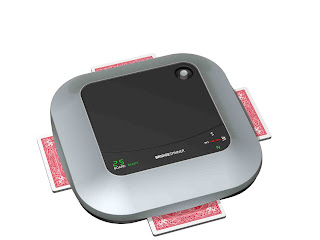 In the winter of 2010-11 I led an investment round and total reconstruction of a truly innovative startup: BridgeSpinner. The company has invented a revolutionary gaming console for  the game of bridge - the worlds maybe most popular card game. Bridge has not been innovated since it's creation in the beginning of last century, and where Poker has undergone massive change in the last 10-15 years and is now attracting young players with exiting game play, Bridge has stalled. This is now changing with online offerings, and whole new possibilities are opening up.
The BridgeSpinner uniquely and literally building a bridge between the social offline game play with real cards and four friends around a table, and the digital online univers with its vast community and learning offerings. Its kind of an advanced internet-enables card shuffler and game registrator. This allows everybody to play multiplayer games, participating simultaneously in tournaments around the world and accessing game data to improve your game and learn the tricks.
The company is mow on the road with a new business plan and great partnerships and if all goes well launches in US at the end of 2011.
I now serve as chairman of the board and co-owns the company with some very dynamic, talented and visionary folks.
Indsendt af Lars Lundbye kl. 9:48 PM